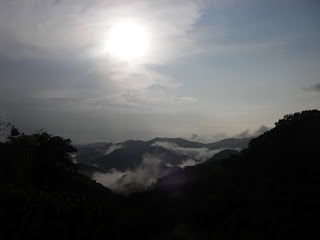 We left Nexpa as the swell dropped, headed deeper to Oaxaca and the many wonderful waves there. We said our goodbyes and hit the road, the turtle and its shell lumbering along the windy and bumpy roads of southern Michoacan.

The roads are not that well marked down here, and you need to be paying really close attention to where you are headed. The signs are random and not very clear. Thus we were able to justify missing our turn to the coast route and proceeded to head up into the mountains for a 4 hour detour...opps. Sometimes it's just the way of it! 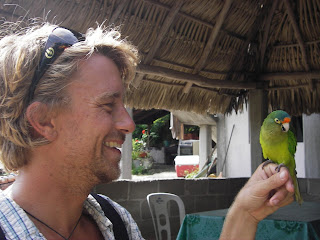 Entering Guerrero, we pulled into Troncones late night on Friday to a restaurant I remembered eating the best Tiramisu ever years earlier. To our dismay, it had changed owners. We were delighted, however, to find that the new owner had worked in New York for 25 years making pizza. It was the best pizza ever, anywhere!

The recent shark attacks in this area have seriously hit the tourist industry. Four surfers have been killed in the last year in Troncones and nearby. We checked the waves in the morning and found them to be closed out. We didn’t bother to hunt for any as were just focused on getting south. So we kept on movin’ through Ixtapa-Zihuatenejo and then on to Acapulco.

What kept us running south! 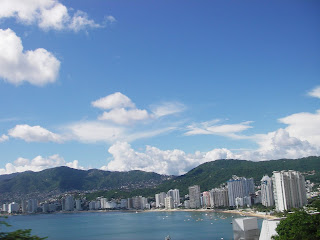 Acapulco is a huge city, sprawling for miles in all directions into the steep hills and valleys surrounding the famous bay. We foolishly chose to take the libramiento, or free road into the city, and found ourselves in a ten mile long traffic jam. One lane feeds in and one lane out of the city. We arrogantly tried to take a short cut and ended up in the tight and incredibly steep side streets of the outlying slums.

The downtown area of Acapulco fills a huge bay with white sand beaches and blue-ish water. Giant hotels line the shore, and nightclubs line the boulevard. The Hard Rock Café, Señor Frogs, and BarbaRoja beckon tanned and toned tourists looking for a good time. It was not our idea of a good time, in fact, quite the opposite. We couldn’t get out of there fast enough. 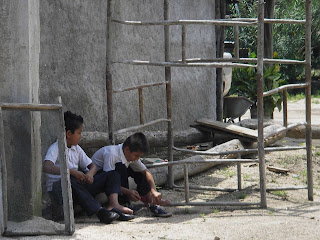 There are topes (speed bumps) through every towns that make you really have to slow down. It can be annoying but it is also be a great way to see what everyday people are doing. It seems that people here do a lot of relaxing. They can be seen sitting on their porch, talking amongst eachother, stopping to wave and smile to strangers like us who are just passing by. Life here is tranquilo. Simplicity in all areas of living is the recipe for a peaceful life. The fewer possessions the less stress it seems.

Also, there appears to be few regulations on doing business in rural areas. You can just post up wherever and put out what you’ve got to sell. No business licenses to deal with, no permits from the health department. This could be a double-edged sword, as there are no regulations on sanitation for some restaurants or roadside stands, or at least they are not enforced. Still, the people seem to be pretty healthy, and we haven’t been sick yet (touch wood). I think it actually makes you stronger to inoculate yourself with some powerful bacteria.

We stayed in a small town called Marquelia on the main road south that night. Dozens of small taco stands lined the road, and we found one with the cheapest and best chicken tacos ever. They came with marinated onions, guacamole, and salsa roja. We had two orders each, and a michelada, which is beer with tomato juice and pepper sauce. Delicioso!

The people in the small towns are some of the friendliest ever. They are not jaded by tourism, or desperate for your money. They are always willing to help out in whatever way they can. Many people have been to the states to work, and they relate their stories of where they were and what they did. Most seem to be happy to be at home.

Puerto Escondido is an amazing bay that is filled with some of the best surf in Mexico, or the world for that matter. We pulled in late and the afternoon onshores were blowing so we proceeded to do some much needed errands. We heard the swell that we had been racing down for had hit and that the surf was big.

We wanted to surf Puerto, but the idea of triple overhead draining death pits didn't seem too inviting, compared to the long hollow right points that we knew would be pumping further south. So we hit the road before sunrise, only regretting we hadn't been able to find my friend Jenny who was staying in town. But I knew we would cross paths with her soon. 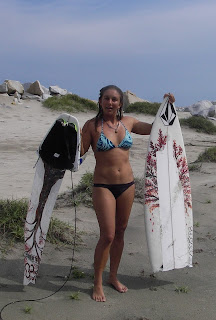 Boards don't last long in this part of Mex!
We weren't disapointed with our decision to race south as we were gifted with the waves of our dreams. 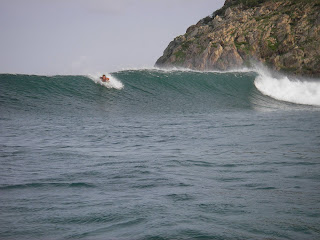 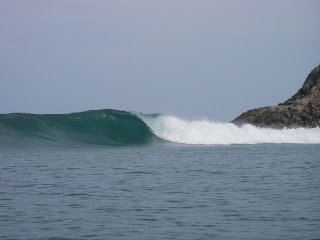 It was time to just surf. Surf ourselves out. Surf til our arms couldn't paddle anymore, til the rashes on our bellies and arms turned painful, and our skin was begging for a break from the sun. But then the body just seems to adapt, and soon 6-8 hours a day in the water becomes the norm. 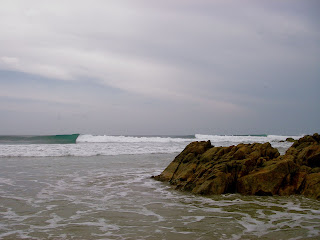 The road into the famous Barra de La Cruz is the worst road we have yet encountered in Mexico. A narrow, rutted and eroded patch of dirt winds through a hilly and tight valley. Driving this rig on through town is kind of like dropping into a big wave, just a little scarier.

We pulled up to the beach and Barra was doing its thing. Overhead peelers grinded down the point, tubes spitting on the takeoff. We got some really great rides with a pretty mellow crowd, and then found a campground to park up for the night. 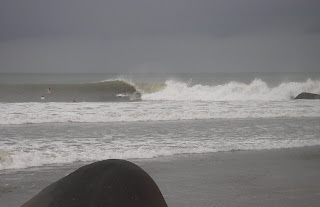 Barra de la Cruz has had a lot of publicity lately, if you haven’t heard. Rip Curl had a contest here a few years ago and got some of the best conditions in a decade. Many surf movies were made of the waves before during and after the contest and the surf world gobbled it up. Pros were claiming the best wave ever. The magic of the wave had been revealed, and all wanted a taste. 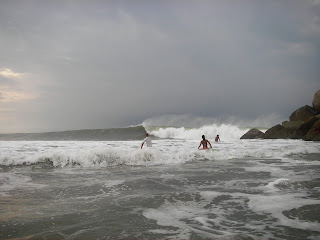 Now it is common to have twenty or more people out, all jockeying for position and pushing each other deeper into the pit. Vanloads of hungry wave-mongers show up daily, from all over the globe. All this means more pressure on the local community and its infrastructure.

The community has responded in a very proactive way. They recognized the wave as a resource and regulated access to utilize it for their benefit. All who wish to use the beach must pay US$2, which includes the use of showers, bathrooms, and a palapa to hang your hammock from. There is also a restaurant on the beach, serving the hungry surfers cold beers and garlic filets. 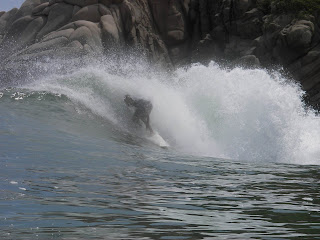 When I came to Barra eight years ago, we camped on the beach. Several other surfers were camped out as well, and we were all charged US$1. This is no longer the case. All camping is a mile or so into town. Several places offering bungalows and camping have sprung up, and all seem to be pretty full this time of year.

Surfing has created a reason for the people to come together and take an interest in the future of their beach. It has had an impact on the locals, perhaps in some ways negative. Yet they have chosen to turn the problem into a solution, and are just starting to see the benefits. 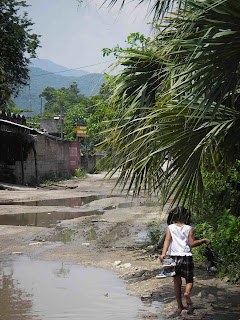 The crux of all of this is how the community is structured. Barra de la Cruz is recognized as indigenous by the Mexican government, and is relatively sovereign in their decision-making. The town is communally run, all residents taking turns in various public positions, like the chief of police and restaurant worker. All of the proceeds from the beach use and restaurant go to the community to pay for public works.

This community structure makes Barra different from all of the other surf spots we have visited so far in Mexico. They saw that they could either sell out or hold out, and they chose to protect what they had. They could have easily sold the beach to a developer or the town to some rich Spaniards, but there is a consciousness here that recognizes this place as sacred and irreplaceable.


Furthermore, they are protecting their livelihood in other ways. All businesses are locally owned, and most of the money made in Barra is spent in Barra. A portion of the food is produced locally, and sold here. The local economy seems to be strong. Most people have a home with running water and electricity, and a way to put food on the table. Many families have their own plots in the neighboring valley where they grow food for themselves and for profit. 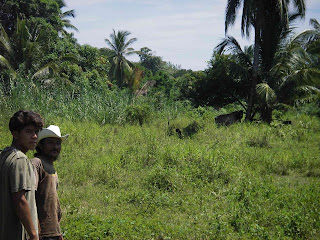 Olgilver and Giovanni showing me the fields

I met a man named Olgilver who is building a house for his family right off the beach at Barra, and he invited me to visit his family farm in the next valley over. We took a walk over the hill and through the woods to his little plot of paradise. He ranges eight head of cattle in a cow-calf operation on land that is planted to cocos and limes. We ate cocos and then took a tour of the banana plantation. In the new plantings of bananas he was intercropping corn. He grows everything organically, no chemicals at all. He loaded me up on some awesome fruit; cocos, limes, and the best bananas ever. 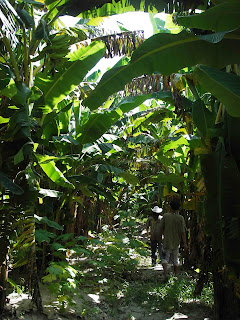 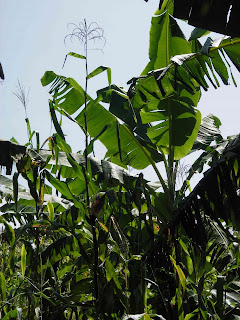 Despite the attention they have paid to protecting their heritage and their beach, the people here still lack potable drinking water. They also have septic systems that are pretty low in the water shed, like in the water table. We are planning a few projects, like a slow sand filter to purify the well water, and composting toilets to keep sewage out of the water supply. We are also attempting to implement a water bottle refill campaign to reduce the amount of plastic from drinking water bottles in the town.

The community structure of Barra could be modeled and reproduced in other areas that are suffering from the pressure of foreign investment and development. If other communities could see how another responded to these pressures by preserving their land and heritage, they may be more convinced to not sell their family land to developers.

We are excited to be here and are looking forward to continuing building relationships withing the community!
Posted by SWoBs at 7:16 PM