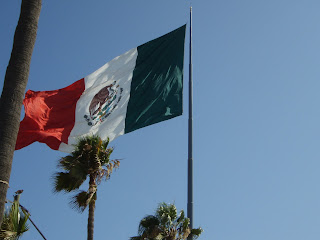 Without much pomp or celebration, we left Ojai at 10:30 p.m. on Sunday the 27th. The night before we had a wonderful impromptu dinner at my Mom’s house with her friends and Aubrey’s parents to see us off, so we felt that we could leave after saying our 10th goodbyes. We also knew there was a swell running and we hoped to catch a bit of it.

It turned out that this was perhaps the best time to drive through L.A. and environs, as all it’s citizens were tucked neatly in their beds, while visions of barrels danced through our heads, motivating me to drive til 3:30 a.m. and the border outside of Tecate. We found a deserted lot and parked up to the sound of dogs barking off in the distance, announcing our arrival to their owners.

The morning light gave us our first glimpse of Mexico and Baja California Norte. Tecate is actually quite a nice town; very clean and colonial despite being so close to the globalization nation of ours. We crossed the border without much more than a look from the border guards, which was fine with us as we were smuggling quite a stash of fresh fruits and veggies from my mom and dad’s homes. There was no way they were getting my avocados! 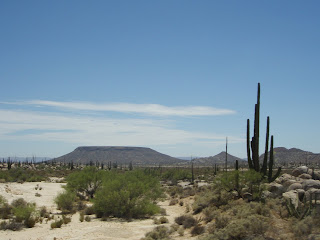 El desierto
The road from Tecate to Ensenada is beautiful. Rolling hills and chaparral are dotted with little ejidos and the occasional mini-super. We rolled through Ensenada without stopping, until we saw a sign for “Organic Produce’! Café Bohemia is run by an ex-pat couple, whom fed us some amazing sandwiches while we used their wireless and shopped for produce. Epic!

The next day, after swearing not to drive in Baja at night, we arrived in Abreojos at 10:30 p.m. to the sound of our camper jack grinding on the ground- it had fallen out of its support and was dragging after only 15 mins on a dirt road. This alerted our presence to some campers nearby, and one came to our aid. His name was Bruce (my dad’s name), and he showed us where to camp.

In the morning we awoke to some swell, about head high and a little mushy. We decided to get wet, despite feeling that there were more waves further out the point. After a bit, we were over it, and headed up the point more only to find overhead reef break surf with only two guys out. Out there! The wind was picking up, but we had a good session, paddling a lot. 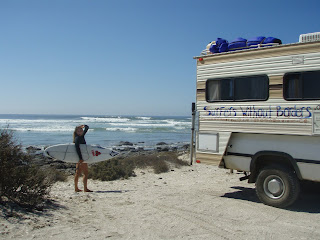 I was pretty much wasted after powering on the camper and driving many hours per day, so I basically slept all afternoon. I awoke to the winds howling offshore, and we took a walk around to find some waves. Without knowing the breaks, and having no-one around, we were kind of at a loss; so we decided to walk to town. 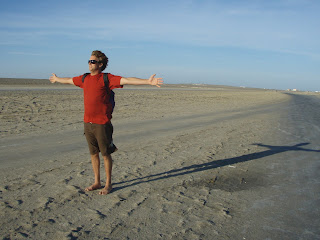 solitude in the salt flats 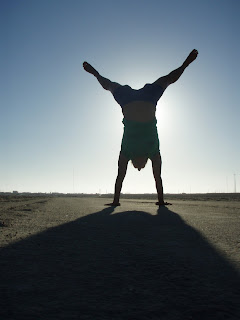 Abreojos is a town of about 1000 people who rely mainly on fishing. The fishery is a co-operative, and was saved from the ravenous clutches of the Japanese in the ‘70’s. The fishery is supposedly still in good shape, as evidence of the many people still living off of the bounty of the sea. We sampled some of this bounty, tasting corbina tacos at a local taqueria “Las Palmas”, with the most amazing hand-made flour tortillas ever. We met some friends; Viro the cocinera, a cute puppy who we wanted to steal, and some skater kids. Fish eagles chirped “hello” from atop the light poles as we walked by, their nests made of the discarded ropes and nets of fishermen. 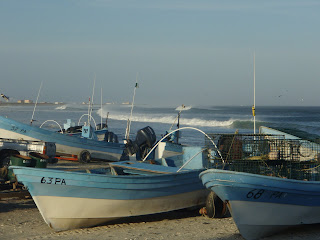 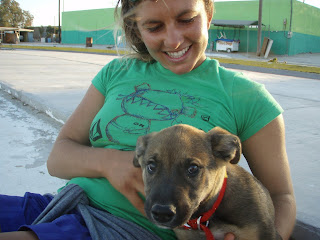 It seemed like the people were pretty well off here. Everyone drove nice cars and had homes. Trash was an issue, however, plastic blowing all over the salt flat approaching town. Evidently, the town is on sewer systems, and the sewage flows straight out into the lineup of the wave in town. Reports of surfers contracting hepatitis are not uncommon. Dry composting toilets would go a long way here and in more places in Baja, saving water and keeping the waste out of the ocean.

We thought we might be able to make it to Scorp’s by the afternoon if we left Abre’ early. What a mission it proved to be! And we learned again one of surfing’s most profound lessons: NEVER LEAVE SURF TO FIND MORE DOWN THE ROAD. Wait it out and bide your time if you can.

The road along the coast through Mulege and Loreto really is beautiful. The sea is a translucent turquoise color, highlighted by crystal white sand. Cardon cactus and Ocotillo line the shore, and springs here and there support palms and bananas.

We pulled into San Juanico under the cover of darkness, but I could immediately tell a lot had changed since my first visit 3 years prior. Street lights and paved roads greeted us and showed us the way to the point, past “Gringo Hill” and its many new houses. Land speculation and development fueled by the proximity of epic point surf and cheap land had begun to become more evident. 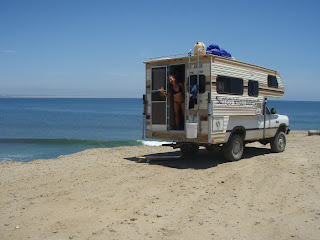 We found a spot out on third point, past the Cantina and its exorbitant rates of 100 pesos ($10 US) per night per person to camp. Yeah right! The last thing I’m going to do in Mexico is pay a gringo to camp amongst disease carrying flies and grommets on ATVs.

Waking up the next morning, our fears were realized as we looked out onto onshore, knee-high slop. Oh well, lesson learned, again. At least we had a nice place to camp on the bluff overlooking 3rd point… at least for now. The following morning we were informed by Tito the policia that we could not camp there, or on Zona Federal (Federal land). 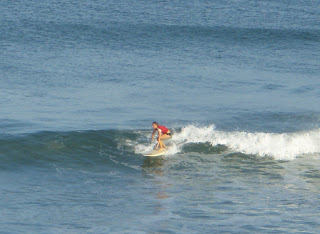 The swell did improve a bit later, and we managed to find some fun rides, perfect for the fun shape and the sinlge fin.

It seems that everywhere there are waves to be ridden and money to be made, a bittersweet dilemma exists; that between development and preservation. I guess it is inevitable, “progress”. Though it is hard for me not to be jaded, having traveled extensively in Central America, and seeing developments devour the land. The speculation by foreign investment drives the price of the land up, and the locals can no longer afford to buy it, and they are enticed by the high prices to sell their own, forcing them into cities or unproductive plots. 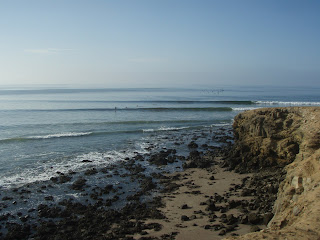 San Juanico is no exception, and is perhaps the best example in Baja of this dilemma. There are a lot of gringos here, some for the summer and a few for good. Trailers and haciendas line the point, and legal battles over the right to profit underlie the tranquil setting.

Though I don’t think the Mexicans mind much. After all, they are profiting too. Land that was selling for $15K US a few years ago is now worth $150K. I was offered two properties by the man selling gas, only $35K for 100 some square meters of barren, wind-blown desert. What a bargain! I guess everyone wins… 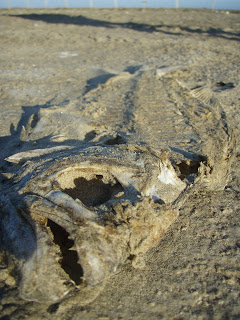 The main issue in my opinion is the long-term sustainability of the town. Water is a premium, and is pumped from one well. Rain is infrequent, if it happens at all. Yet the toilets in town are the flush type, leaching that precious elixir of life into the ground, carrying our feces with it.

Still, life is good for most. Food is available. Beer is a complement to meals. Everyone has a car. San Juanico is rich by Mexican standards, and only stands to get richer as the gringos gobble up the point for their Mexican getaways. This presents a great opportunity for sensible design, an example that can be duplicated in communities with greater need. The kinks could be worked out here, where there are more resources and time for experimentation.

Human waste can be converted into soil by red worms, or turned into methane for electricity and cooking fuel. Water can be harvested from the marine layer with fog screens, and re-used as many times as possible. Wind breaks of nitrogen fixing trees can be planted to shelter fruit trees raised on grey water, and perennial vegetables can be grown under those. Surf boards can be constructed from agave stalks grown right on the point. Lots of potential! 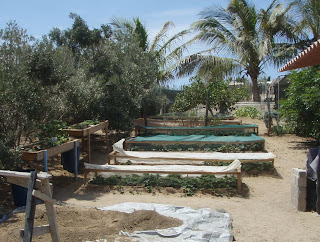 Yesterday we visited one such site taking advantage of that potential. Howard "Howie" Lange has started a small-scale organic farm here in San Juanico, selling fresh fruits and vegetables to the locals and gringo transplants. He can grow year-round here, producing lettuce, chard, tomatoes, cucumbers, zucchini, melons, and strawberries! They sell every leaf, generating enough income after only one season to hire one full time and another half time employee. The soil is amended with worm compost, made from the castings of red worms fed with horse manure and food scraps. 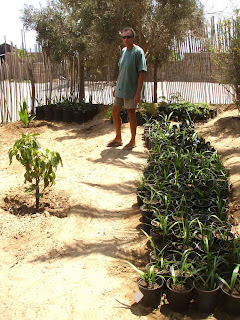 There are plans to expand the farm to a larger plot somewhere outside of town. The demand seems to exceed the supply so far, and that only looks like it will continue, as more and more people are flocking here to take advantage of the (relatively) cheap land and (relatively) good surf. We gave Howard some seeds that we brought with us, with the promise that he would grow them out, sell the fruit, and save the seed to share with others! Plant it Forward! 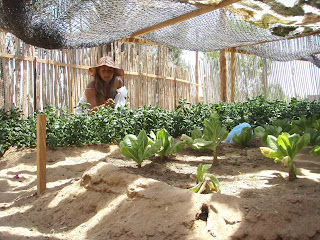 Many thanks to Mike Kuntz for hosting us at his Baja Bungalow Art Compound, and his very gregarious good hospitality and humor. He is a true living surf legend, traveling the world before most were off the couch, finding unridden waves and getting 57 second nose rides. He has created quite an oasis here in the desert, and you can find him at Second point when it is going off. 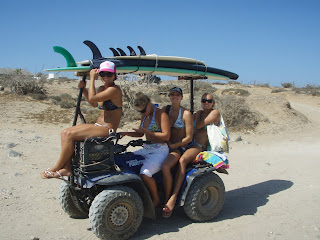 Last night we stayed at the Stanley’s Surf Shack right off first point. We had a great session riding mini perfection at Firsts, and then returned to eat fresh Yellowtail caught by locals with the help of Drake. There was quite a crew of us, including Bo and Drake Stanley, Mary Osbourne, Haley and Sierra from Santa Cruz, Jaime from SLO, Kirra from SoCal, and Tim and Evan from Patagonia in Ventura.

We are now journeying South towards Cabo San Lucas and the East Cape, exploring the coast as we go, making new friends and riding new waves. Paz!
Posted by SWoBs at 9:41 AM

what an epic trip so far amigos! I am excited to read your blogs and keep track of your adventures. Being stuck in paradise with minimal waves is tough and to live vicariously through your adventures is infecting my system with a serious systemic travel bug. I went to the doctor and she said that I need to hit the road in order to cure this ailment. I asked her if your blogs could help to aleviate the symptoms, she replied maybe, but chances are they would make it worse.
So anyways my friends, thanks again for the red-rocket and awsome stoke that rides with your love and passion for life and people. I send you my deepest blessings and cant wait to hear about your next adventures, despite what the doctor says! Eli Sheiman

Just ran across your pics while hunting for sources of inspiration for the Cabo Wabo Tequila spec spot I'm putting together.
Would it be alright if I used your pics? I love 'em.I'm a motion graphics designer, and can do so much with what you have on here.